Emerging from the depths of a pub with doubtful origins, Clavicule delivers a garage rock influenced by the swarming Californian scene (Ty Segall, Meatbodies, FIDLAR …) to which are added broad influences ranging from punk to psyche, in going through surf or grunge.

On stage it’s a real deluge: fuzz, distortions, and pachydermic hammering of barrels, the group delivers an intense and tireless set, both explosive and melodic.

After releasing their first self-produced EP in June 2019, the band was noticed by the labels Beast Records and Open Up and Bleed Records and recorded its first album at the studio La Double Boite under the direction of Dimitri Dupire. And because it arrives after the breaking Garage in the 2010s, Clavicule’s first album “Garage is Dead” will be released on April 17, 2020 and thus promises to open a new era, that of the Clavicular post-garage! 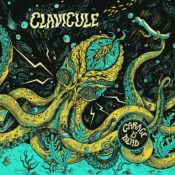