Digger and The Pussycats

You may be asking yourself “Who the fuck are Digger & The Pussycats?”…well they’re two blokes from Australia who’ve been playing trashy rock’n’roll since forming at the start of 2003.

The guy who looks like Pete Sampras after a three-week champagne and pills party is Sam Agostino, the band’s guitarist, while drummer Andy Moore is the member who can be recognised as the Ronald McDonald on crack look-alike. Both members share the vocal duties.

The band started as a bit of a joke, a way to pass time after their previous band Fort Mary split up, and to allow Sam and Andy to continue playing shows around their home city of Melbourne while searching for a new bass player. The first few shows saw the band playing a mix of original songs and covers, with audiences taking a warming to the crazy and most-often shambolic live shows, and eventually led to a strong following in Melbourne. In late 2003 Digger & The Pussycats signed to Melbourne’s Spooky Records, home of The Beasts Of Bourbon, Spencer P Jones, Hugo Race, The Devastations and The Drones, releasing their debut album “Young, Tight and Alright” in November of that year.

Upon releasing this album the band began touring extensively through Australia, and by mid-2004 Digger & The Pussycats had completed their first full European/UK tour. Further national Australian tours followed, as well as a week of shows in New Zealand before the band recorded and released their second album “Watch Yr Back” early in 2005. Following a national tour, Digger & The Pussycats once again packed their bags for a European tour which began in May 2005. With interest coming from all corners of the continent, it wasn’t until November 2005 that the tour came to an end, having included more than 80 shows in thirteen different countries.

After a brief return home to Melbourne, Digger & The Pussycats returned to Europe for a 3 week tour in March 2006, before taking some time off to write and record a third album in the second half of 2006. In 2007 the band did an extensive tour of the United States including appearances at Gonerfest in Memphis and Budget Rock Festival in San Francisco.

In 2008 and 2009 the band once again performed extensively in Europe and in 2011 the band performed their first tour in China.

Along the way Digger and The Pussycats have recorded and released 4 studios LPs, a live album, a split 10inch, a CDEP and ten 7inch singles. Not bad for a couple of trashy 30 something guys. 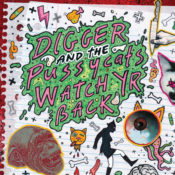 Digger & The Pussycats ‎
Watch Yr Back
SOLD OUT 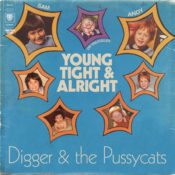 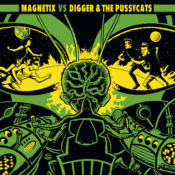 Magnetix vs Digger & The Pussycats
7
SOLD OUT 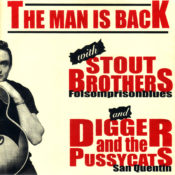