Turning up on the Memphis underground music scene in the late-90’s, Harlan T. Bobo first provided instrumental sideman duties in several local bands, including Viva L’American Death Ray Music, Love Clowns, and The Limes. Then, during the early part of the next decade, Bobo began to take to local stages under his solo guise, performing his own material inspired by personally-topical romantic sagas. Displaying an aptitude for set design and theatrics, Bobo soon amassed a sizeable regional following and gradually won hearts on a national level as Goner Records released his three solo albums of nakedly-emotional, garage-inflected singer-songwriter Americana, 2004/2005’s Too Much Love (initially self-released before picked up by Goner), 2007’s I’m Your Man, and 2010’s Sucker, respectively. Upon their release, the latter two albums received excellent Pitchfork reviews, as well as unanimously positive press across a wide array of other music-coverage outlets. Live shows started becoming visual affairs, with Harlan constructing 100% of the set pieces (angel wings, lighting, etc), and also during this time, Harlan and his music was featured in Craig Brewer’s reality series, $5 Cover, which aired on MTV in 2009. Accurate comparisons to Leonard Cohen, Nick Cave and Wilco have punctuated write-ups of Bobo’s albums and performances, and his albums have benefited from their anomalous nature amongst Goner Records’ more rock-oriented roster and the body of work the label has amassed over its almost 20 years of activity.

Having done string arrangements for Cat Power’s breakthrough album, The Greatest, Bobo continued to pursue similar avenues in 2010 and 2011 when he collaborated with The Memphis Symphony Orchestra’s conductor-less “Opus One” offshoot, the brainchild of Bobo-collaborator and longtime MSO cellist and composer Jonathan Kirkscey. Opus One was conceived behind the idea of expanding the Symphony’s local demographic audience, and Harlan’s songs were first suggested due to the compositional ease and harmonious manner for which they would fit together with a chamber orchestra. For Opus One’s 2010 – 2011 season, Harlan’s original songs were classically arranged by the participating MSO players and performed, with Bobo, as chamber pieces in front of non-traditional audiences at Memphis’ premiere underground rock club, The Hi-Tone Café. The collaboration garnered a great deal of glowing press locally and after-the-fact reviews online.

In 2011, Harlan, along with fellow Memphis music notables Jack Oblivian and Shawn Crips’ The Limes, successfully funded a 40-show European “Memphis Revue” style tour through Kickstarter. Having started to split his time between France and Memphis a few years ago (eventually settling in across the pond for good), Harlan T. Bobo continued to perform solo and tour Europe as such, but soon embarked on a different project, a super-group of sorts known as The Fuzz – in 2013. The band, aside from Bobo, is more or less a rotating cast of players including former members of the 90’s scuzz-punk band Action Family (itself with ties to legends Pussy Galore and Boss Hog) and drummer Bruce Saltmarsh. Playing 2013’s Goner-Fest 10 and subsequently releasing a self-titled album of garage-ragers on Italy’s Munster Records later that year, the Fuzz (not to be confused with Ty Segall’s band of the same name) have helped expand the breadth of the Harlan T. Bobo musical frame of reference nicely. The Fuzz toured the states during the summer of 2014

2014 has seen Harlan T. Bobo, now based in France with his wife and son, busier than ever with festival appearances, touring, the rerelease of Too Much Love (CD and digital with a bonus track) via both Goner Records stateside and French’s Beast Records. Also, Harlan has two album’s worth of solo material – the long awaited follow-up to 2010’s Sucker. The recordings, as yet untitled, find Harlan backed by European musicians, and are slated for release in Spring of 2015.

Harlan T. Bobo
A History of Violence
SOLD OUT 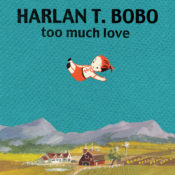 Harlan T. Bobo ‎
Too Much Love
SOLD OUT 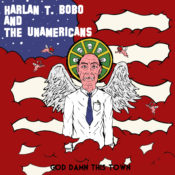