After 20 years under perfusion of the Garage and Punk 77, more than 500 concerts, 3 albums, 1 live, several singles and compilations released in Europe, Japan and USA, FLYING OVER stoped to play in June 2015.
In November 2017, after 2 years of cryogenisation, the regeneration is total, Jet Boy & Jet Girl are back with the members of 2009 under the name JET REACTIONS, with Jet X – Bass (Hero -X, Jakes, Complications), Jet Beeps – Guitar (Heartbeeps, TV Killers) and a new drummer: Jet Gardener (Darlings, Videodrome).
Always in the same vein, the first rehearsal was a blast, the band setted in motion the old track set list and started directly to work for the new single (to be released in May 2018).
Stay tuned ! 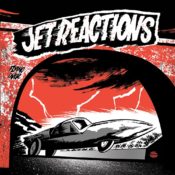