Nico Wireman has been active in Le Mans ever since the 90s, first as a singer, then as a bassist-singer, before going one-man-band as The Big Wireman, and lastly playing drums in Cannon Fodder. A typical rock and roll character, with his flashy stage gear, his musical knowledge ranging from punk and garage up to vintage deep blues, swing and soul music, and his look of a postmodern cowboy lost in a Z-series movie.

But always there where you wouldn’t expect to find him, Nico Wireman took advantage of the imposed experience of lockdown to record on his own, twelve tracks showing less spontaneous and wild than usual. In a personal and intimate mood, he dared to bare all, exploring introspective matters with a sensitive though distanced approach, and touches of sober, somewhat dark yet never cynical humor, resulting in this collection of songs displaying serene and assumed maturity. Recorded at home in confined autarky, “Locked But Loved” was mixed by Cimrya Deal, who added a few additional arrangements, making this album not so much the snapshot of wierd times but the portrait of an accomplished artist. 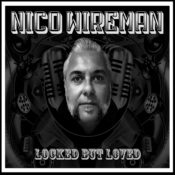