The Spoils are a Melbourne band from Australia, featuring Sean Simmons and Bronwyn Henderson, who are known for their dark urban balladry and side-show themed vignettes.
The Spoils (previously called The Losing End) formed towards the end of the 20th century in St Kilda, Victoria. In 2001 they released their debut album, Hurtsville which reached number four on the Australian Independent charts.[1] In 2003, The Spoils traveled to Brisbane, Australia[2] and settled on a northern postcode later returning in 2005 to release their second album, “Goodnight Victoria”.
Fresh from touring Goodnight Victoria, including performances at the 2006 & 2007 Queenscliff Music Festival, The Famous Spiegeltent and The Age Writers Festival as well as a tour of New Zealand, The Spoils released, “The Spell” single and toured Europe for the first time taking in Germany, France, Czech Republic & Spain.
In 2008, The Spoils returned to New Zealand and Europe. They released their third album in 2009 followed by a tour of Europe, New Zealand & Australia. 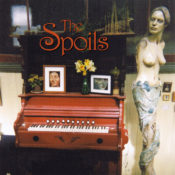