Those of us of a certain age are always convinced that everything was better twenty years ago. Chocolate was tastier and cheaper, television was more entertaining, the summers went on forever but foremost music sounded better! But did it?
The Wooden Faces is comprised of a younger producer and drummer and two older musicians. Anth Mills is a 30 something producer and drummer who stated that anything could be done by a computer and still sound as good as an old amp or compressor or echo chamber. He has worked with Therapy? Jimmy Nail and many other artists so Dan Donnelly and Goulven Hamel had to consider this argument. So began an argument about analogue versus digital recording… boy did they regret it!
Flying The Wrong Way was the exploration of this argument. The album was recorded two ways at the same time. Each signal was split, one going to a reel to reel tape recorded and one going to a computer. The computer part was easy! The control room was a spaghetti mess of leads going to a borrowed analogue desk and compressors. Paper and pens were used to write down what had been done and in general there was a dawning realisation how easy modern recording is in comparison to it’s predecessor. Computers log dates and information and route signals without leads and we can send each other files.
Goulven had to fly from France and record all the guitar parts in 24 hours because…you know… he couldn’t be sent files over the internet. The reverb chamber was the stairwell and all backing vocals and percussion were performed in that stairwell at the same time because there was a limited amount of channels to record to. In terms of the process it was firmly established that modern digital recording is much, much easier. IN terms of the end product… You decide for yourself!!
Flying the wrong way is released on cassette and digital download. In buying the album you get two versions. One has never been turned into digital information. It has been recorded, mixed and mastered with only analogue equipment directly on to cassette. The digital download has been edited, mixed and mastered using cutting edge technology and saved as a file. So in terms of the argument you be the judge. Answers on a post card if you are that way inclined or you could always send an e mail if that’s your persuasion!! 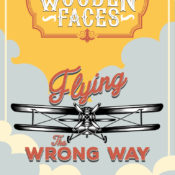